2019 Soloists and Ensembles in Residence

Composition applicants are welcome to submit scores for consideration by any of the ensembles in residence. In each applicable case, instrumentation could range from solo to the full ensemble. Any subset of the following ensembles-in-residence will be considered for performance. If you have questions, please send a message to [email protected].

Option A (1-4 players): Mivos Quartet, with or without electronics

Apply Now to the 2019 VIPA Festival

About the Mivos Quartet

Ever since their successful debut in France, the B3:Brouwer Trio, composed of Jenny Guerra, violin, Elena Solanes, violoncello and Carlos Apellániz, piano, have established themselves among the leading chamber groups in the contemporary music scene, especially among Spanish and Latin American composers of their generation. The B3:Brouwer Trio undertake contemporary works with the same rigor in concept, energy and passion they dedicate to Classical-Romantic repertoire, making them a unique formation in the current field of Spanish chamber music, as stressed by critics who have complimented their brilliant performances for their “beauty in sound, individual virtuosity, clear and balanced blend, and flexible sense of rhythm”. Their compromise with contemporary music is their motivation and main basis of their work, as can be noticed by the numerous works specially dedicated to the trio by composers such as Leo Brouwer, Jordi Cervelló, Mauricio Sotelo, Marcela Rodríguez, Voro García, Eduardo Morales-Caso, Igmar Alderete, Jose Javier Peña Aguayo, Claudia Montero, Georgina Derbéz, Yalil Guerra, Alfonso Ortega, Doménech González de la Rubia, Enrique Sanz-Burguete, Juan Luis Martínez, Roberto Mosquera, Daniel A. Cozzi, or Ariel Hagman. www.brouwertrio.com

About the B3: Brouwer Trio 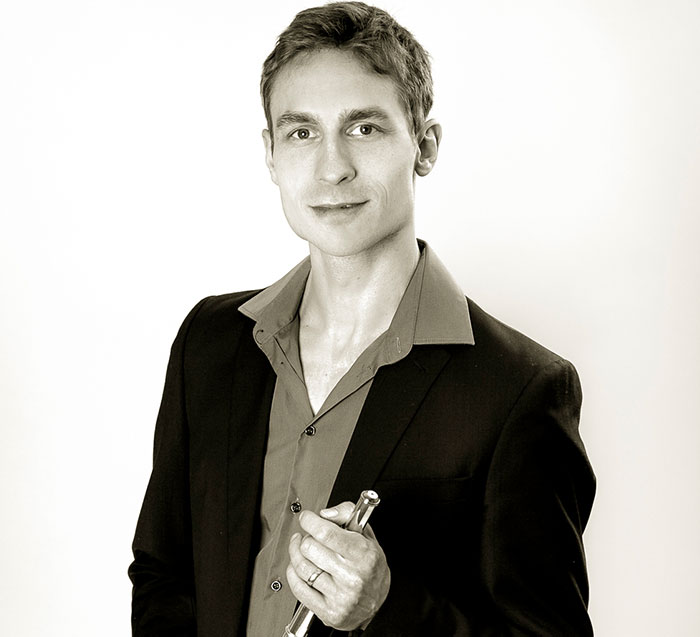 Gregor Schulenburg is a versatile flutist, interpreter and performer in solo and chamber music both at home and abroad. He performed at festivals such as the Salzburg Festival, the Ultraschall Festival, the Edinburgh Festival, the Schleswig-Holstein Music Festival and the Klang Festival Copenhagen.

His repertoire spans from baroque to contemporary and experimental music and he has a great interest in improvisation and in the extensive variety of ethnic music. In this context he is a sought-after duduk soloist and kyotaku player.

He is a member of the ensembles mam.manufaktur für aktuelle musik, Ensemble Extrakte and a guest musician of Ensemble Modern. Amongst others he played in the New European Ensemble, Ensemble Musique Nouvelles, Ensemble Meitar, the New Israeli Contemporary Players, in the oh-ton Ensemble and had his debut as duduk soloist with the Thüringer Symphoniker.

As an interpreter he worked together with various composers, like Helmut Lachenmann, George Aphergis, Simon Steen-Andersen and has performed in numerous first performances.

Gregor Schulenburg holds awards and scholarships of different renowned competitions and grants, including The German Music Competition, The Stockhausen courses in Kürten and The International Ensemble Modern Akademie (2009/10).

He studied flute at the Royal Conservatory The Hague with Rien de Reede, Thies Roorda and Kersten McCall.

Ausiàs Garrigós Morant regularly performs with orchestras such as the London Symphony Orchestra, Royal Philarmonic Orchestra, Bournemouth Symphony orchestra, Spira Mirabilis and ensembles like Stargaze and Chroma Ensemble. Ausias is a founding member of NASduo, with whom he has premiered and recorded new music playing in numerous festivals across Europe. 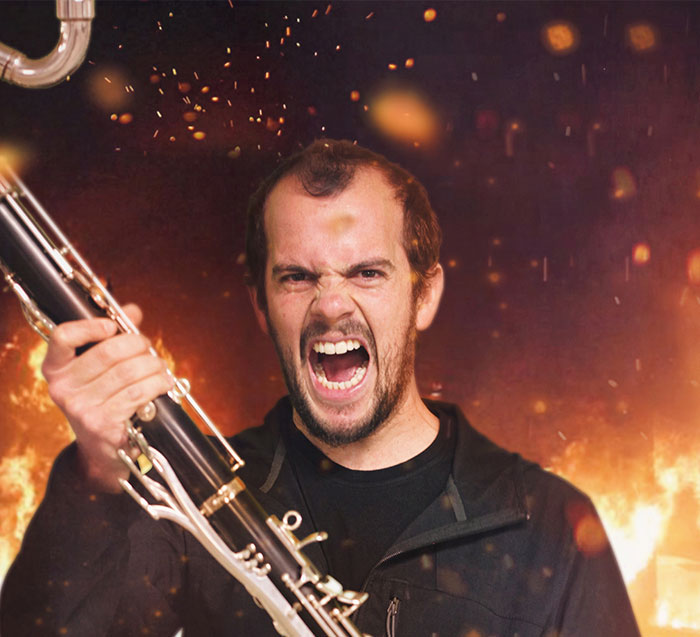 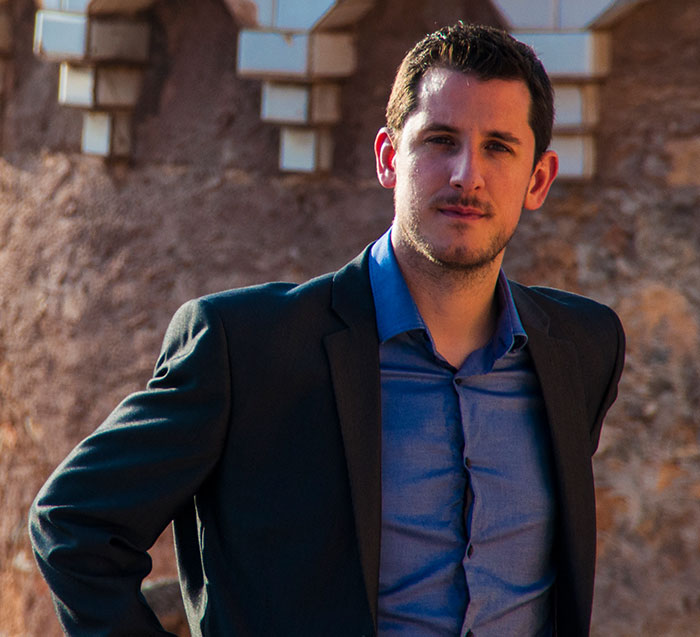 Born in Onda (Castellón), he studied at the Superior Conservatory “Joaquín Rodrigo” and at the Academia “Ad-Libitum. Subsequently, he obtained the Master of Arts “Musikalishe Performance” (2012) and the Master of Arts “Spezialisierter Performance” (2014) with Professor Christian Dierstein in Basel (Switzerland), obtaining the highest qualifications.

In turn, he has received classes from J. Geoffroy, Laurent Maurisse, Katarzyna Mycka, Daniel Berg, Robert van Sice, Pedro Carneiro among others, as well as also different scholarships like the Ministry of Education, BBVA-JONDE foundation and the “Rapp” foundation of Switzerland.

He has been a founding member of “Steel-Wave” Percussion group, “NEXEnsemble” Percussion Group, Basel percussion Group and Per-se-cussió ensemble (Valencia), playing in the best festivals of contemporary music in Spain and narrowing a direct bond with the best Spanish composers and new generations, the special collaboration with the Ensemble Boswil (2010), performing a Japanese music cycle of new generation composers and the Ensemble “eChance” of Paris. He is also a member of the Ensemble d’Arts, a resident ensemble of Rafelbunyol auditorium. With all of them, he has toured throughout Europe and the most important festivals of contemporary music, highlighting “Donaeuschingen MusikTage” (Germany), Music Festival in Basel (Gare du Nord), International Saxophone Conference in Saint Andrews (Scotland) , Mostra Sonora (Sueca, Valencia), etc. and recording for record labels Deutsche Grammophon, Visual Sonora, Stradivarius among others. He is also a founding member of the duo Akt-tkA Duo with the percussionist Jens Ruland with whom he performs theatrical shows at European level and a member of the Synergein Project with Sisco Aparici and Vicent Gómez, with whom he dedicates all his attention to promoting and spreading avant-garde music for percussion and art in a global way.

In his task as a soloist, he has played with different windbands, highlighting the Municipal Band of Castellón with the concerts for marimba by A. Reed and Kopetzki and Ramón García i Soler, as well as the premiere of different works dedicated to him by the composers María José Belenguer, Sandro Balzarini, Camilo Méndez, Voro García, José Javier Peña, Juan Pablo Orregos, etc.

In his pedagogical side, he has obtained the Master in Musical Didactics at the University of Castellón (UJI). He has been a professor at the professional conservatory of Onda, Basel, Ribesalbes, Segorbe, etc. He also teaches and organizes at the “Synergein Project” Academy together with Sisco Aparici and Vicent Gómez. He has been a visiting professor in different Conservatories of Spain and Germany. Since 2014, he is professor of percussion and director of Alto Palancia Music School.

Giorgos Panagiotidis was born in Drama, Greece, in 1982 and started violin lessons with his father at the age of 5. At the age of 13 he won the first prize for young musicians at the Kocian violin competition in Ústí nad Orlicí of the Czech Republic. He was then accepted in the Academy of Music and Theatre in Munich, where he studied with Gottfried Schneider and graduated in 2004 with the loan of a Nicola Gagliano violin for two years. After graduation he joined Lydia Dubrovskaya’s class and in 2007 he returned to Greece to take up the position of assistant concertmaster of the Athens Camerata – Orchestra of the Friends of Music. He has worked with many other ensembles, including the Ensemble Modern Frankfurt, and has collaborated with famous conductors such as Zubin Mehta, Pierre Boulez and Sir Neville Marriner. He has performed in many European concert halls, including the Concertgebouw Amsterdam, Herkulessaal München, Festspielhaus Baden-Baden and Salle Pleyel Paris. He is a founding member of the ERGON Ensemble and also a member of the Tetraktys Quartet and since 2015 Ensemble Modern. 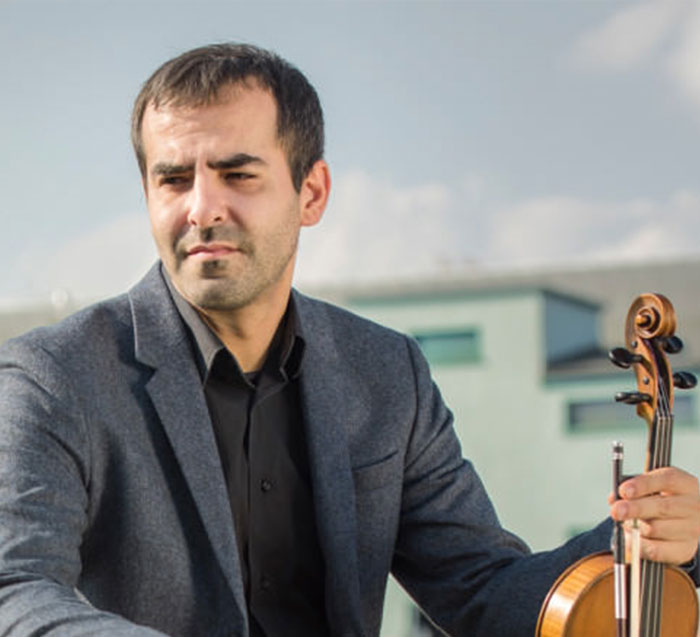 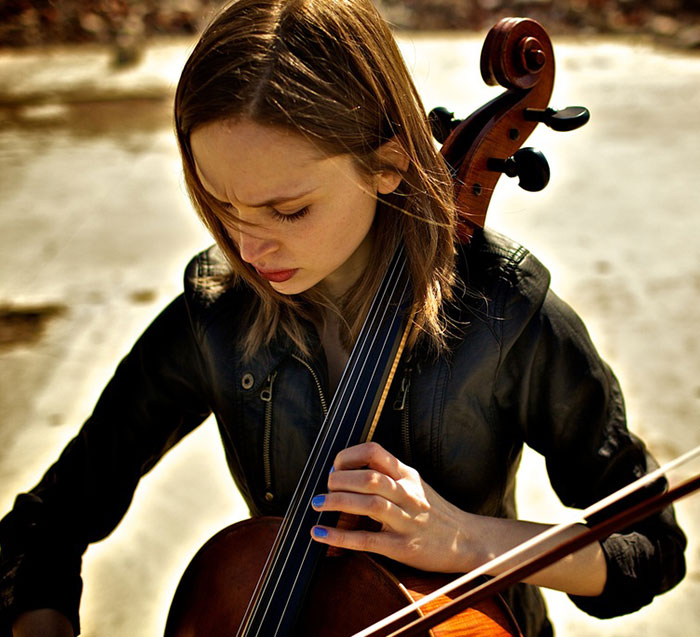 “Trailblazing” cellist Mariel Roberts (Feast of Music) is widely recognized as a deeply dedicated interpreter of contemporary music. Recent performances have garnered praise for her “technical flair and exquisite sensitivity” (American Composers Forum), as well as her ability to “couple youthful vision with startling maturity”. (InDigest Magazine). Roberts’ work emphasizes expanding the technical and expressive possibilities of her instrument through close relationships with innovative performers and composers of her generation. Her passion for collaboration and experimentation has led her to premiere hundreds of new works by both emerging and established artists.

Mariel has released two solo albums, “nonextraneous sounds” and “Cartography”, to critical acclaim. About “nonextraneous sounds”, New York’s WQXR radio wrote: “By playing a program this well-curated, with this much confidence, precision and good old-fashioned muscle, Roberts is not so much “making a statement,” artistically speaking, as she is sounding an alarm. Listeners should come running.”

“There was some hand-wringing in recent years over the future of new music, going something like this: With no dominant musical paradigm to rebel against, will today’s young composers lack a certain edge? Won’t they lose focus, now that eclecticism is the order of the day?
Cellist Mariel Roberts’s solo debut, “Nonextraneous Sounds,” demonstrates that any such anxieties were, to put it mildly, misplaced. The music on this disc, by a range of rising young composers, is nothing short of gripping from the first note to the last, and it’s thanks largely to the intense focus of these highly individual musicians.”
WQXR. www.marielroberts.com

Apply Now to the 2019 VIPA Festival